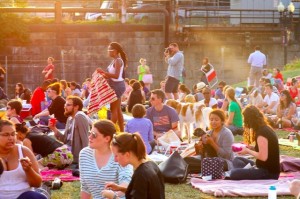 Want to see a film?

The NoMa Business Improvement District has opened voting for its free annual outdoor film series. This year’s theme is “Choose Your Own Adventure.”

Voters are asked to choose 10 out of 22 movies, which include “Men in Black,” “Jumanji” and “Pee Wee’s Big Adventure.” The films picked for NoMa Summer Screen will be shown Wednesdays at 7 p.m. from June 1 to August 24. Blankets, coolers, Frisbees, dogs on leashes and kids are welcome, according to event organizers.

Choose your own adventure this summer by helping us pick this years summer screen films!: https://t.co/7HnojwSKuq pic.twitter.com/ToxZud5W2r