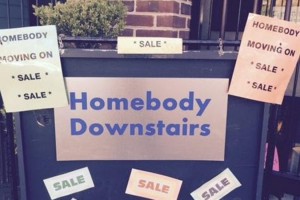 Homebody, which is located in the lower level of Forecast, last summer reopened its clothing boutique at 218 7th St. SE after closing its former location on Barracks Row.

The Barracks Row Main Street organization sent out an email about the closure yesterday.

“Henriette Fourcade, owner of Homebody now located at 218 7th St. SE — in the lower level of the Forecast store — announced this week that she is ‘past ready’ for a change and is suspending operations of her store in the near future,” reads the email from the nonprofit.

The shop is reportedly in the midst of a “moving on” sale.

More information on the closure from Barracks Row Main Street:

A multi talented designer and horticulturist, Fourcade has many options on her radar- and, as she points out, none of those options are as challenging as being a sole proprietor of a single-site retail store open 6 days a week.

After spending time at the beach with family and completing some long overdue travel Fourcade will decide which of many offers she will accept to begin the new chapter in her life.

Happily for the neighborhood, some of the items and lines carried by Homebody will be picked up by nearby Hill’s Kitchen, 713 D Street, SE, a Barracks Row retailer. At least one furniture line will continue to be sold at Forecast.

Homebody was originally opened on Barracks Row at 715 8th St, SE, in 2005 by Fourcade and a former partner. It quickly became a neighborhood favorite. However, by 2015 with the 10 year lease expiring and in search of more weekday shoppers, Fourcade decided to try the Eastern Market area and moved the shop there about a year ago.