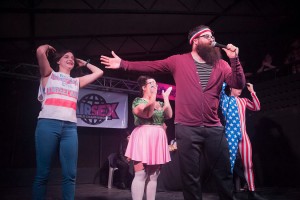 The nationally touring roadshow that has performers “using nothing more than the art of pelvic storytelling and pure imagination” will return to H Street NE next month.

The 2016 D.C. Air Sex Championships will take place at Rock and Roll Hotel (1353 H St. NE) on May 8. The bar has hosted the event multiple times in the past.

Unsure of what the Air Sex Championships might bring to the stage? The show is described by its organizers as “a comedy show that brings people together in a respectfully dirty, unpredictably ridiculous, and oddly touching celebration of sexual freedom and expression.”

Still unsure what that means? Watch this slightly NSFW performance from the D.C. championship in 2010:

More information from the Rock and Roll Hotel website:

Entering its eighth year as a nationally touring roadshow, Air Sex is the worlds first SPART – a combination of sports and art. Each Air Sex show combines the pageantry and prestige of professional sports with the excitement and creativity of a first-rate talent competition. Think Air Guitar, but instead of pretending to play boring old musical instruments, Air Sex participants have jaw-dropping sexual encounters with an invisible partner (or partners!) using nothing more than the art of pelvic storytelling and pure imagination.

It’s a comedy show that brings people together in a respectfully dirty, unpredictably ridiculous, and oddly touching celebration of sexual freedom and expression. It’s a serious competition to see who can fake f-ck nobody better than anybody else. Beyond that, it’s a show you’ll have to experience yourself to believe.

The show is hosted by comedian Chris Trew, who weirded out millions with his Air Sex demonstrations on America’s Got Talent (Howard Stern said we were “highly offensive”) and The Bad Girls Club.