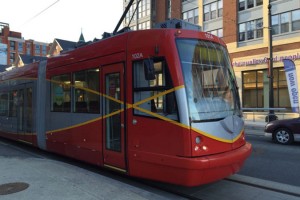 D.C. and federal officials still are looking at connecting Union Station to Georgetown, via a streetcar line through downtown, despite the trouble the District had adding trolleys to a 2.4-mile stretch of Northeast.

The District Department of Transportation, Federal Highway Administration and Federal Transit Administration are scheduled to host a public meeting later this month to talk about the project that could bring 3.3 miles of streetcar track from 3rd Street NE to 33rd Street NW, mostly centered on or near K Street.

The May 17 discussion at the Carnegie Library (801 K St. NW), the first public gathering on the expansion since 2014, will focus on the environmental and cultural effects of a new streetcar line in Northwest. Community meetings on the project also are slated for fall 2016 and early 2017.

After years of delays and setbacks, the District’s new streetcars started picking up passengers for the first time along H Street and Benning Road NE in February.

It’s unclear when a line to Georgetown would open.