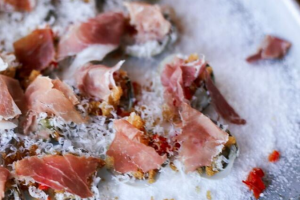 Whaley’s, a new raw bar and seafood restaurant, is slated to open next Monday, according to the restaurant’s website.

The new seafood-centric eatery is a new project by Nick and David Wiseman, the brothers behind DGS Delicatessen.

Whaley’s will open with a menu that includes scallop crudo, Maryland crab and other plated seafood selections. The restaurant is set to initially open for dinner only, with plans to expand later into lunch and brunch.

Read more about the new restaurant in this press release:

Whaley’s, a raw bar and restaurant, will open Monday, May 16th in the historic Lumber Shed at The Yards, located at 301 Water Street Suite 115 SE in the growing Navy Yard/Capitol Riverfront District.

Under Chef Daniel Perron– formerly of Fiola Mare, Blue Duck Tavern and The Oval Room–the opening menu will feature shellfish towers, crudos, a selection of seafood-focused plates and a rotating family-style platter for sharing.  Dishes will feature items like:

The new restaurant’s design, from Edit Lab at Street Sense, is anchored by the building’s floor-to-ceiling, 35-foot tall glass façade with the original roof trusses exposed. The Lumber Shed was an integral part of the Washington Navy Yard, the US Navy’s oldest shore establishment founded in 1799.

Artist John DeNapoli has designed a 100-foot mural “Under The Sea” inspired by mid-century geometrical artists.

Whaley’s will be located on the south face of the Lumber Shed building, between Osteria Morini and Agua 301. The restaurant’s layout will include a 22-seat counter bar and a 44-seat dining room, as well as outdoor patio seating, facing the riverfront and the surrounding Yards Park.

Partners, cousins and fourth generation Washingtonians Nick and David Wiseman, the team behind DGS Delicatessen & Specialty Bar, are the creative force behind Whaley’s. Dave and Nick began prowling the fish barges on Maine Avenue as kids and dropping chicken necks to catch crabs on the Delaware shore.   “We grew up eating clams, crabs and oysters right out of the water or just off the boat,” said Nick Wiseman. “Imagine how excited we are to open our own raw bar on the waterfront in DC.”

Whaley’s will initially be open for dinner, with plans to expand to brunch and lunch service. Make reservations online at WhaleysDC.com for dinner starting Monday, May 16th. Reservations are now available.