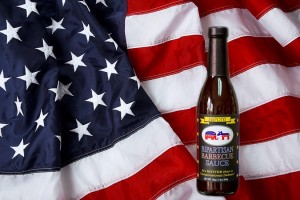 A Capitol Hill shop specializing in olive oil, vinegar and other condiments is going into the political barbecue sauce business.

Sapore (660 Pennsylvania Ave. SE) recently announced the launch of its newest product, “bipartisan barbecue sauce.” The concoction, made with tomato, molasses, ancho chilies and chipotle, is “hotter than a congressional debate,” according to its tagline.

After years of enduring bickering and disagreements, the Washington, DC market needed something that both parties ‐ Republicans and Democrats ‐ could agree upon: A great tasting barbecue sauce made with fresh ingredients, with a little spice and a lot of humor. So says Renee Farr, co‐founder of Sapore Oil and Vinegar on Capitol Hill and creator of their new product: Bipartisan Barbecue Sauce. The former catering sales manager first used her ingenuity to spice up Capitol Hill with a line of spices and gourmet foods sold exclusively at her retail store. Renee is now launching their “Hotter than a Congressional Debate” Bipartisan Barbecue Sauce.

Renee said of their launch, “We wanted a sauce that was a little different, but that still met our high standards of flavor. So we went big – big on flavor and big on political satire.” The bottle label suggests you use the sauce “liberally or conservatively” but diplomatically adds, “Independents will like it too!”

“Not only does it take a light hearted poke at Capitol Hill, but it’s addictively delicious. Bipartisan BBQ Sauce is a tomato/molasses based sauce with a kick of ancho chilies and chipotle. It’s especially good on pork and beef, and takes grilled chicken and shrimp to whole new level”.

Renee states, “My husband, (co‐founder) John Farr and I sourced an amazing product and designed the branding. We’re initiating a homegrown campaign to market this product in the Washington D.C. area. Thanks to that effort, you will find Bipartisan Barbecue Sauce in other local stores beside Sapore this summer.

The sauce is available in one variety: Original Bipartisan Barbecue Sauce, 16 oz., retailing for $10.95

more stories
Previous
At Home on the Hill: Grand Living With Amenities Galore
Next
What to Expect for the Capitol Hill Area This Weekend