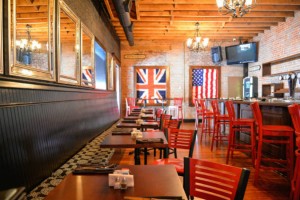 The Alibi pub near the U.S. Capitol will soon be able to serve alcohol after the owners’ application for a liquor license was approved by the District Alcoholic Beverage Regulation Administration.

The license was granted on the condition that Martin Scahill, a former business partner of the owners, is barred from any involvement with the pub. Scahill was a part owner of My Brother’s Place, a bar that used to occupy the building at 237 2nd Street NW but shut down after failing to pay fines for multiple charges of serving alcohol to minors.

Rachel Traverso, who, along with her father Richard Traverso, owns The Alibi, was previously engaged to Scahill and was an employee at My Brother’s Place, according to the ABRA order.

The order detailed numerous penalties levied against My Brother’s Place during its “sad and sordid history.”

“The litany of misdeeds committed at the establishment includes multiple incidents of illegal alcohol sales to large numbers of minors and the intentional sale of age identifying wristbands to minors by employees so that the minors could buy alcohol inside the establishment,” the ABRA order says.

My Brother’s Place developed a reputation for serving to minors, particularly among Catholic University students, who reported being served alcohol without showing ID or after showing poor-quality fake identification, according to ABRA. The owners of My Brother’s Place still owe $16,500 in unpaid fines related to these charges.

After My Brother’s Place closed, Scahill applied for a license for a new eatery at the location. Scahill was accused by the alcohol board of being unfit to receive a license based on his history with My Brother’s Place, but a hearing was never held as Scahill revoked his application.

The license process for The Alibi was delayed as the regulation board attempted to determine Scahill’s involvement with the new company that owns and operates the pub. Ultimately, the owners offered to obtain an order barring Scahill from the location and any involvement with the company for five years.

The barring notice requires the owners of The Alibi to call the police if Scahill is on the premises and prevents Scahill from doing any paid or unpaid work for the company.

On Wednesday, ABRA accepted the barring notice against Scahill and granted the pub a license to serve alcohol on the condition that they adhere to the terms of the notice.

The pub, which has operated as a restaurant without liquor since March 2015, does not have a set drink menu yet. However, a sample preview menu on their website lists a mix of American and British craft beers as well as a cocktail menu.

The owners of The Alibi could not immediately be reached for comment.

Photo via The Alibi

more stories
Previous
Crime Roundup: Teens Rob Woman at Gunpoint in Hill East
Next
What to Expect for the Capitol Hill Area This Weekend