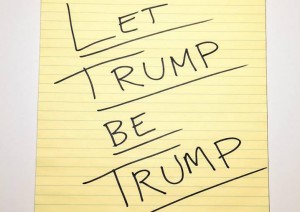 What would the U.S. be like under a Donald Trump presidency? A new Capital Fringe Festival play aims to find out.

The play, “Let Trump Be Trump,” explores a potential future where President Trump and his “idealistic young staffers” try to push a controversial immigration bill through Congress, according to the play’s Facebook page.

The play is scheduled to hit the Eastman Studio Theatre in Gallaudet University (800 Florida Ave. NE) on these dates throughout July:

Tickets are slated to go on sale next Monday, June 20. As an added bonus, Washington Post employees apparently get in for free.

BTW: all @washingtonpost staff get FREE admission to LET TRUMP BE TRUMP this July: https://t.co/HEWPxyzesS

more stories
Previous
Hill Pet of the Week: Mason
Next
Pet-Wise: We’ve Had a Love Affair With Your Neighbors Since 2000