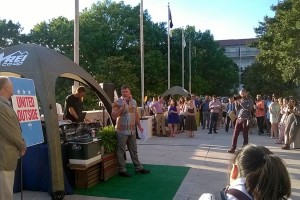 A national recreational outdoor retailer is embarking on a campaign to give locals more than 100 chances to go outside.

REI CEO Jerry Stritzke spoke about the upcoming event series at a party the company hosted at the National Museum of American History Saturday.

“We’re doing a summer of 100 days of outdoor events,” Stritzke announced to a crowd of about a hundred people. There should be no excuse for anyone to stay indoors this summer, he added.

Brewery events, bicycle tours, kayaking and camping classes are all on the agenda from now until the new store opens this fall.

As part of the series, REI will also donate $100,000 to charities including C&O Canal Trust, the Potomac Appalachian Trail Club, the Washington Area Bicyclist Association and the Outdoor Foundation, Stritzke said.