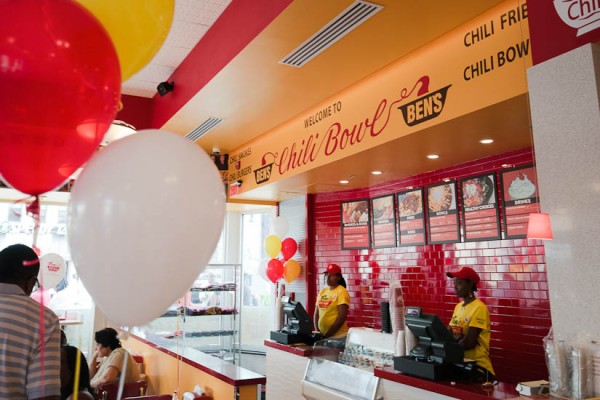 The H Street corridor Ben’s Chili Bowl has turned one year old this week, and it’s time to party.

The half-smoke purveyor at 1001 H St. NE is celebrating Saturday with games and a visit from the Nationals Natsmobile.

Also on Saturday, the Southeast Library is having a book sale and  Pacers Running (300 Tingey St. SE) is hosting what it calls “The Great North American Naughtical Beer Mile.”

The thermometer is expected to reach the lower 90s Saturday under partly sunny skies, according to the National Weather Service. But storms might develop in the afternoon. No rain is in the forecast for Sunday, which likely will have a high temperature in the upper 80s.

And according to Jessica Oros, an editor at East City Art (more info about them on Facebook, Twitter or through the publication’s newsletter), interesting places to stop for D.C.-area art this weekend include:

Foundry Gallery (2118 8th St. NW)
5-8 p.m. Saturday
Members of the Foundry Gallery are celebrating “summer, outdoors, freedom from school, and the 100th anniversary of the National Park Service” in an all-gallery art show, according to its website.

The Clay CoOp (328 North Stonestreet Ave., Rockville, Md.)
10 a.m. to 4 p.m. Saturday and Sunday
Local clay artists from the D.C. area are slated to showcase their works in Clay CoOp’s event, “Proximity.” All art work present at the show is up for sale, according to East City Art’s website.

more stories
Previous
At Home on The Hill: A Garden Oasis in Northeast
Next
Morning Rundown