A house near Barracks Row was unanimously voted into the D.C. Inventory of Historic Sites by the District’s Historic Preservation Review Board yesterday for its role as the headquarters of a lesbian feminist group in the early 1970s.

The house at 219 11th St. SE, which was home to the Furies Collective from 1971-73 is the first lesbian-related historic landmark in D.C.

The Furies Collective were a group of radical lesbian feminists who printed a monthly magazine and other publications that helped shape lesbian feminist ideology nationally and globally. The house near Barracks Row served as the home and headquarters for the collective.

The HPRB also recommended the house for national historic recognition in the National Register of Historic Places. Mark Meinke, a local LGBT history advocate who prepared the application said he is confident that the house will make it onto the national register.

“The National Park Service in 2014 launched an LGBTQ heritage initiative and they’re hoping to recognize a lot of queer sites,” he said. “This is one of the sites they’re waiting for because they don’t have any lesbian sites on the national register, so this will add a bit of diversity.”

Meinke, who co-founded the Rainbow Heritage Network last year to advocate for and secure historic recognition for LGBT sites around the country, spent nearly 10 months preparing the 63-page application. In it, Meinke noted that though the collective was short-lived, its contributions to lesbian and feminist thought were lasting.

“In the space of 18 months, the efforts of the collective’s twelve women had invigorated the debate over what lesbians needed to do and what they needed to oppose,” he wrote in the application. “Their arguments for independent self-reliant women had become a norm for many lesbian feminists and even within the wider women’s movement.”

The application also shed light on the Barracks Row area’s role as one of the first gay and lesbian neighborhoods in the District. In the application, Meinke explains how Barracks Row in the late 60s and early 70s was home to some of the city’s only gathering places for gays and lesbians.

Meinke said he isn’t currently working on other historical applications in the area but there are several sites in the area that played a significant role in the the District’s LGBT history.

“The Barracks Row area was an early gay and lesbian neighborhood, so there are a lot of sites around there that would be interesting to nominate,” he said.

Meinke was joined at the preservation board meeting by former Furies member Joan Biren and the home’s current owner Robert Pohl. 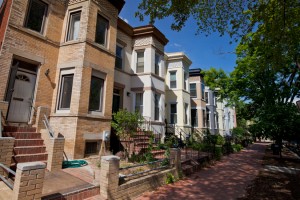 (Updated at 2:20 p.m.) An expansion of the Capitol Hill Historic District approved last week has earned mix reviews from locals.

Some residents in the area tried to stop the historic district from growing. But ANC 6C Mark Eckenwiler, who represents the new historic zone, has stood behind the expansion.

The Capitol Hill Restoration Society advises historic home owners to “resist the temptation” to “improve original features of [their] property.”

Do you support this expansion of the Capitol Hill Historic District? You can weigh in through the poll and in the comments.

Frustration is lingering among some Capitol Hill property owners after a failed attempt to stop the expansion of the area’s historic district.

Tim Abdella, who lives on the corner of G and 3rd streets, said people on his block joined property owners on F Street in a petition with 24 signatures opposed to joining the Capitol Hill Historic District. He said he pulled an additional four or five signatures on his own seven-home block.

He said his family planned to make an addition to the third level of their home, but the newly imposed district rules will like prevent them from doing so. In past Historic Preservation Review Board staff reports, the ability to be “perceived from public space” is accounted for when evaluating third-story add-ons. The two sidewalks bordering his property leave him no way of approaching his project. 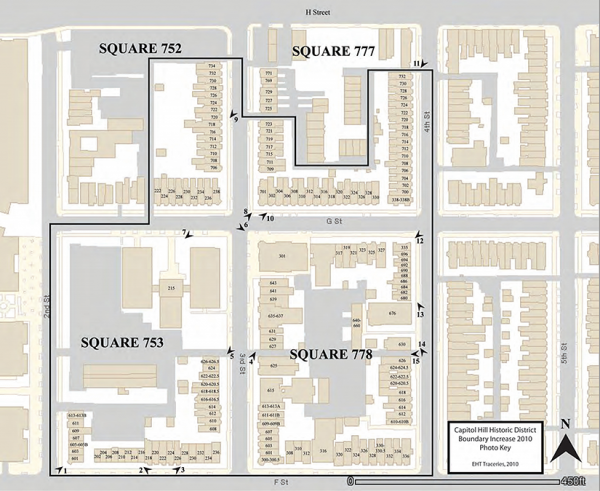 The Capitol Hill Restoration Society advises historic home owners to “resist the temptation to ‘improve’ original features of [their] property.”

ANC 6C Mark Eckenwiler, who represents the new historic area, spoke favorably of the expansion at the Historic Preservation Review Board public hearing last week. He said the ANC voted in favor of the expansion after it held many meetings in which residents had the chance to voice their opinions.

“Local residents and owners have had numerous opportunities prior to today to offer their input,” Eckenwiler said in his testimony. “Advanced notice of all four meetings I described was delivered, by hand, to each of the properties in that area, and I can attest to that because I participated in that personally.”

Edward Giefer, who works at the D.C. Historic Preservation Office, echoed Eckenwiler’s statements on the extent of community outreach involved in the planning stages of the expansion.

The Planning, Zoning and Environment Committee for ANC 6C first held public meetings in conjunction with ANC 6A to explore the possibility of designating the area as historic in 2007. The demolition of 12 historic row houses near 2nd and G streets for the Fisher Brothers’ Station House project kick-started the process toward the recent expansion of the historic district into this region, Eckenwiler said in his testimony.

As part of the agreement for the permit to construct the 7-story, mixed-use residential space, the Fisher Brothers’ company was required to fund professional surveys of the properties east of 2nd Street for possible inclusion in the Capitol Hill Historic District. 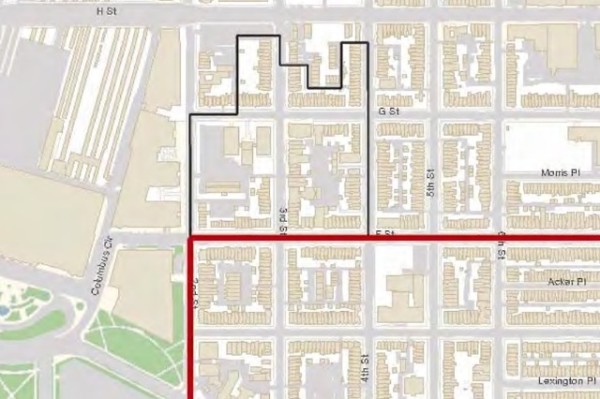 The northern boundary of the Capitol Hill Historic District could be extended to include more homes east of Union Station and south of H Street NE.

ANC 6C has filed an application to expand the historic district to include the two entire blocks from 2nd to 4th streets NE and F to G streets NE, plus parts of the two blocks just north of there.

“The late 19th- and early 20th-century rowhouse architecture found within these four squares is consistent with that found within the current Capitol Hill Historic District and many buildings shared the same owners, builders and architects,” the 54-page application says.

The document was prepared by Maria Dayton and Laura Trieschmann of the architectural history firm EHT Traceries, Inc., the same company that presented a proposal earlier this year to create a much larger historic district to the north and east of the current zone.

Many locals panned that proposal, saying they don’t want additional restrictions on their homes, and that EHT and the Capitol Hill Restoration Society, which commissioned the study, made an insufficient case for the designation.

The proposed Swampoodle addition to the historic district includes 170 buildings deemed “contributing” because of their architectural features. Another 18 non-contributing buildings fall within the boundaries. These blocks are mostly occupied by rowhouses in the Queen Anne, Colonial Revival, Classical Revival and Romanesque Revival styles, the application says.

The application included information on the delightfully odd name Swampoodle.

“Roughly bounded by 1st Street, NW on the west, 2nd Street, NE on the east and K and G streets on the north and south, Swampoodle owed its name to a reporter, who in 1859 while covering the dedication of the St. Aloysius Catholic Church at North Capitol and I streets, NE, referred to the area as “being dotted with ‘swamps’ and ‘puddles.’

“Adapting these two words, the name Swampoodle was irrevocably attached to this area well into the 20th century. Home to working-class laborers and immigrants, primarily Irish, Swampoodle obtained a reputation as being gang-ridden and downtrodden.”

A public hearing regarding the expansion will be scheduled by the Historic Preservation Review Board, the HPO said in a statement issued today (Friday). 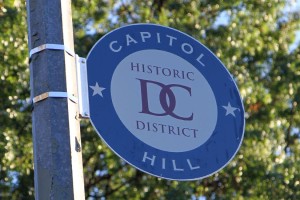 The Capitol Hill Restoration Society has spent this month telling locals about a study they commissioned on expanding historic preservation zones in Ward 6.

Many locals said at a community meeting Monday night that additional historic designations would cost them time and money. Supporters of the designation said it would give locals an additional tool to fight ugly pop-ups and inappropriate development.

What do you think? Take the poll and tell more in the comments. If you live in the Capitol Hill Historic District, how do you think it has helped and hurt the neighborhood? 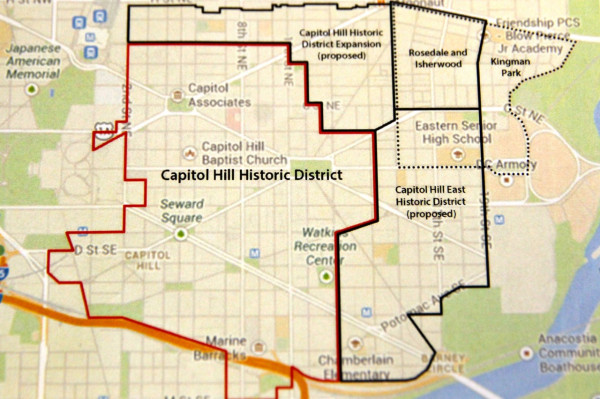 “We believe there are some wonderful buildings and housing stock that should be recognized for its value to the community,” Eig said, describing notable corner stores and wood-frame buildings that fall within the studied area to the north and east of the current historic district.

But locals said they don’t want additional restrictions on their homes, and that EHT and the Capitol Hill Restoration Society, which commissioned the study, had made an insufficient case for the designations.

Susan Fariss, a 17th Street SE resident for the past 14 years, said the creation of a historic district that included her home would have a real impact on her neighbors. She described having recently spent $1,000 to have a wooden picket fence built around her yard. A historic designation would have required that fence to be wrought iron, she said, which she estimated would cost two or three times more money.

“If there’s a historic district, then I’m not building a fence, and I’m going to let my dog s**t in your yard,” she said to laughter.

The designation would cost locals time and money, said resident Peter Gould, a homeowner in Hill East for the past 3 years.

“In the event that you are permitted to improve your house, you’re talking about the need to have full architectural drawings,” he said. “That’s several thousand dollars.”

ANC 6B commissioner Francis Campbell said that while he wanted to stop homeowners from building “garish” third-story additions, locals need to be able to expand their homes as they see fit.

“How is this going to benefit us?” he asked.

Whether long-time residents will be able to make home modifications they need, like installing a wheelchair ramp, was a key concern of ANC 6B commissioner-elect Denise Krepp.

“There are a lot of older residents who have lived here 40, 50 years,” she said. “How will they be able to alter their houses so they’ll be able to remain?”

ANC 6B commissioner Brian Flahaven said he wanted to improve the public process around the construction of pop-ups, but wasn’t sure a historic designation is necessary. He said he hasn’t heard much support for the plan.

“I would have to see pretty strong neighborhood support,” he said.

Pat Taylor, who has lived in the area since 1988, supported the designation plan and said residents should seek to protect the neighborhood.

CHRS said it will not sponsor the historic designations without local support.

The plan cannot advance without community backing and an official champion, Kim Williams, a representative of the District’s Historic Preservation Office, assured locals.

Whether to designate the additional areas as historic would be an informal process, rather than a ballot initiative.

If the boundaries of the district were changed, residents and developers would need approval from the D.C. Historic Preservation Office for new construction and many alterations to buildings. Property values have risen every time a neighborhood has earned the historic designation, according to the preservation office.

CHRS will hold public meetings next month for residents in the proposed expansion areas.

CHRS has also released a question-and-answer sheet from the Historic Preservation Office that aims to address neighborhood concerns about landmarked districts.

Advocates for expanding the district say the new area includes historically significant buildings from before and after the Civil War. The architectural history firm EHC Traceries will complete a study of the area, Hill Rag reported. That study is set to be released next month.

The mayor appoints members to the Historic Preservation Review Board, which oversees the historic districts. The election next week may affect the potential expansion of the historic zone. The DC Preservation League released a candidates’ questionnaire on preservation.