(Updated at 3:30 p.m.) Drivers trying to get from Southeast Freeway to I-295 this morning are facing long delays after a dump truck fell onto its side.

The vehicle hauling a load of dirt overturned on the 11th Street Bridge outbound ramp to southbound I-295 before 8 a.m., police said. With the ramp completely blocked, traffic backed up for two miles, according to transit officials. The ramp reopened about 8:30 a.m.

Traffic on I-295 in both directions remains heavy around the 11th Street Bridge “due to rubber necking,” police said.

It was not immediately known if anyone was injured.

The crash scene was fully cleared by 2:30 p.m., police said in an update. 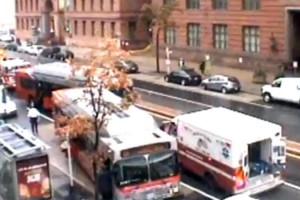