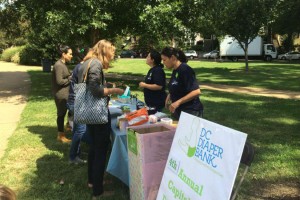 Organizers of the annual Capitol Hill diaper drive are hoping to collect more than 14,000 diapers over the next two weeks.

On Saturday, businesses on and around Capitol Hill will begin collecting diapers, baby wipes, diaper cream and formula for the D.C. Diaper Bank. The drive will last until Sept. 26.

Last year’s drive yielded more than 13,000 diapers, but organizers are hoping to gather even more this year.

The Hill resident who provides thousands of free diapers to needy families across the region has been nationally recognized and could win a $25,000 award.

DC Diaper Bank founder Corinne Cannon is one of 10 finalists for a Women of Worth award. The contest sponsored by L’Oreal Paris honors women across the country for their humanitarian work. Finalists were selected this summer from a pool of more than 4,000 nominees, and each received $10,000. Now, online votes made before Nov. 21 will determine which woman wins an additional $25,000.

“This could take us to the next level and help more families faster,” she said, explaining that the funds would allow DC Diaper Bank to work with three new distribution partners.

Cannon, who previously worked on educational programs in museums, founded DC Diaper Bank in 2010 after learning that food stamps and WIC don’t cover diapers. The organization now collects 75,000 diapers per month and delivers them from a warehouse in Silver Spring to nearly 2,600 families across the greater Washington area.

Cannon said more community organizations have been asking the nonprofit for diapers this year. They typically fielded one request per week in previous years, but have received three or four per week this year, she said.

“Where ever you have hunger, you’re going to have diaper need, too,” she said.

The mother of two, whose husband nominated her for the award, said she was inspired by other nominees of the contest, which include the founders of groups that help children with cancer and women recovering from drug addiction.

“The most fascinating thing about this has been looking at the other 10 women,” she said. “There are so many different ways to help.”

Contest votes can be made online through Nov. 21.