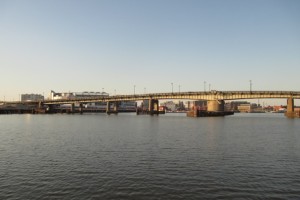 Two bridges in Ward 6 need major repairs, according to a new report.

The Frederick Douglass Memorial Bridge over the Anacostia River and an overpass near Barney Circle SE made the American Road & Transportation Builders Association’s list of the Top 10 Most Traveled Structurally Deficient Bridges in the District.

The bridges aren’t “imminently unsafe,” but are “in need of significant repair,” according to the trade group.

The Barney Circle area overpass, which opened in 1963, has 2,250 crossings daily. The bridge is Ramp 6 over the Park Road Connection, according to the ARTBA.

Of the District’s 253 bridges, 14 were deemed structurally deficient. These crossings are among more than 61,000 bridges across the country that need major repairs.

ARTBA based its findings on data from the 2014 National Bridge Inventory, which the Federal Highway Administration released in January.