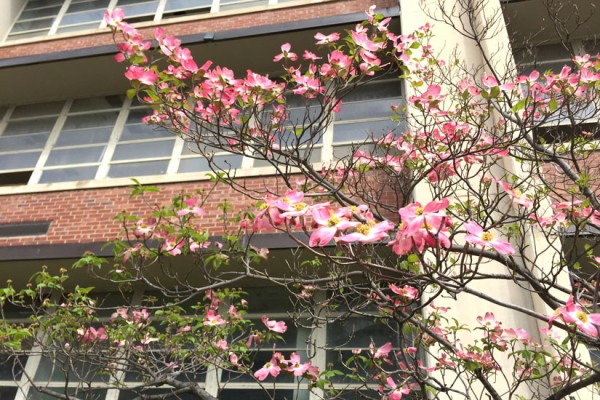 Streetcar Podcast — The Hill Is Home launched a podcast about “where the streetcar started and where it may go.” The first installment features Ward 6 Councilman Charles Allen, local historian Robert Pohl and Anwar Saleem, the head of H Street Main Street. [The Hill Is Home]

How Plastic Bag Fees Have Been Spent — The nickel tax on plastic bags crafted by ex-Ward 6 Councilman Tommy Wells has generated about $10 million since 2010. About a third of the funds have gone toward direct river cleanup and items like rain gardens to catch runoff, according to an analysis by The Washington Post. Uses of the funds intended to protect the river have included $1.7 million in personnel costs and $1.2 million to send every D.C. fifth-grader on a river-related field trip. [Washington Post]

Capitol Hill ‘Bar Madness’ Party — During March Madness for basketball, The Hill Is Home ran a bracket for bars near Capitol Hill. The winner, Little Miss Whiskey’s Golden Dollar, will be celebrated tonight. The party starts at 1104 H St. NE at 6 p.m. [The Hill Is Home]

Community Meetings — Items on ANC meeting agenda this week include a presentation by the First District’s “top cop,” Commander Jeff Brown, and evaluation of a liquor license for the second restaurant from the owner of Rose’s Luxury. [Capitol Hill Corner] 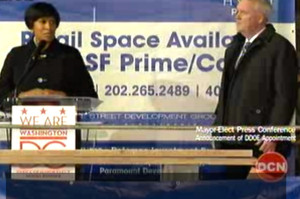 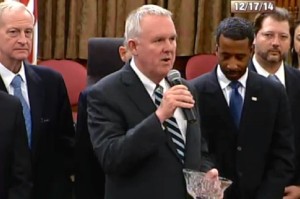 Council Chairman Phil Mendelson praised Wells in the Council Chamber and give him and other soon-to-be ex-members each a ceremonial glass bowl.

“You’re one of the few Council members who actually has a brand … Livable/walkable,” Mendelson said. Wells can largely take credit for the plastic bag fee and an investigation of ex-Council Chair Kwame Brown’s use of a Department of Public Works SUV, Mendelson said.

Wells said he is looking forward to the next year.

“This will be a great legislative body with a great executive branch, and I’m so proud to have served on the D.C. Council,” he said. He thanked his staff and other members. 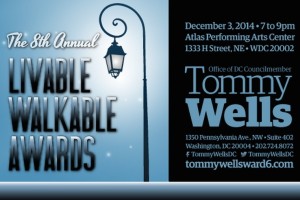 Hill residents and business owners will be recognized tomorrow night (Wednesday) for their leadership.

D.C. Councilman Tommy Wells announced the winners of the 2014 Livable, Walkable Awards today. Recipients will be honored at a free, open-to-all party tomorrow at the Atlas Performing Arts Center.

The 8th annual awards are given to local people and organizations that “make our great city even greater,” Wells said in a statement.

The awards celebration will be held from 7 to 9 p.m. tomorrow at the Atlas Performing Arts Center (1333 H St. NE). Food will be served from Nandos Peri-Peri, Crunkcakes, H & Pizza, Dangerously Delicious Pies, the Queen Vic and elsewhere.

Hill residents have until the end of the day to put their neighbors up for an award.

The office of Ward 6 Councilman Tommy Wells is accepting nominations through the end of today (Monday) for the Livable, Walkable Awards. The 8th annual awards will honor local people and organizations at a gala Wednesday, Dec. 3.

“The Livable, Walkable Awards celebrate the leadership, commitment and vision of people who are making our great city even greater,” Wells said in a statement. “To create a truly livable, walkable community, it takes leadership and vision — not just from those elected to office, but also from our neighbors, city employees, civic organizations and local businesses.”

The award categories are:

The awards will be given during a free event at the Atlas Performing Arts Center from 7 to 9 p.m. Dec. 3.

To nominate a person or group, fill out this form.

0 Comments
Around Town
The Navy Yard Harris Teeter has a wall of frozen cakes.
The store has a “make your own six-pack” station.
Councilman Tommy Wells spoke at the store opening.
Frozen cakes
Dozens of people awaited the store opening Nov. 4, 2014.
Shoppers lined up for free samples of wine and food.
High-theft items like razor cartridges are locked near the checkout lanes.
The store has a full selection of magazines and children’s books.
Near the store entrance
Previous Image 1/9 Next Image

Navy Yard finally has a supermarket.

The Harris Teeter at 401 M St. SE opened Tuesday evening with a ribbon-cutting and a crowd eager to explore the bright store.

Offerings at the 50,000-square-foot market include a “make your own six-pack” selection of craft beers, a Starbucks, a wide selection of wines, heaps of organic and conventional produce, and a wall of frozen cakes.

Navy Yard resident Devon Jones said he and his mother, who uses a motorized wheelchair, were thrilled to get a grocery store close to home. They’re used to having to make a 20-minute trip to the Safeway near the Waterfront Metro station.

“This is one of the key amenities for any neighborhood to be successful,” he said about the store with a staff of 215.

Before Harris Teeter opened about 5:30 p.m., store director Tim Porch presented oversized checks of $5,000 each to Amidon-Bowen Elementary School and Jan’s Tutoring House, and thanked locals for their patience during construction. 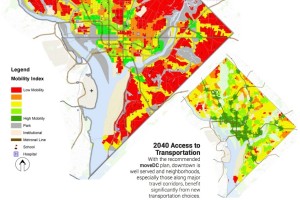 As 1,500 job seekers filed through Southwest’s Arena Stage for a job fair on Friday, organizers paid close attention to the attendees with the worst chances of finding work — those with criminal backgrounds.

About half of D.C.’s previously incarcerated people, also called “returning citizens,” are jobless, according to studies cited by the D.C. nonprofit Council for Court Excellence.

Ward 6 Councilman Tommy Wells and the theater organize the annual fair and this year welcomed companies open to applicants with criminal records. 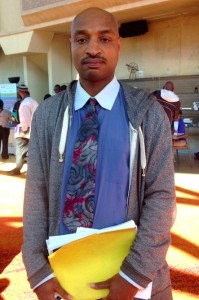 Kevin Grover, a 43-year-old who spent eight years in prison in the 1980s, said he has been struggling to find work since he lost a job working for Metro in 2010. Most employers set his application aside when they see he has a criminal record, he said.

“Even if you have 20 years experience, your background is the first thing they’re going to look at,” said Grover.

Grover attended the fair — which was open to all — hoping to find a maintenance job, but said he would take any work he could find.

Returning citizens shouldn’t be excluded from opportunities, Wells said. “They’ve done their time and paid their debt to society.”

Wells introduced legislation this year that bars employers from asking about candidates’ criminal backgrounds until they make a conditional job offer. This so-called “ban the box” initiative was signed into law in August.

“The two biggest challenges these people face are finding a job and getting housing,” he said. “This bill gives people a better shot.”

Deborah Evans-Atkins, who represented USPS, said that before Wells’ law went into effect, her office did not immediately eliminate candidates with criminal records. She declined to describe USPS’s criteria in evaluating ex-offenders.

Nonprofits and other government agencies also had tables at the fair. And many returning citizens provided their information to the city’s Office of Returning Citizen Affairs, which advocates on their behalf.

“We have to bring opportunity to their level,” he said. “A lot of time they think it’s out of reach.”