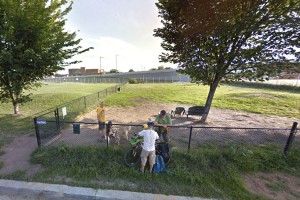 A dog park in Near Southeast will close for at least 2 1/2 years, beginning next week.

The Virginia Avenue Dog Park, near 10th and L streets SE, is within an area that CSX will block off to the public to facilitate the construction of the company’s train tunnel. CSX will install a fence around the area as early as Monday, the company announced yesterday.

“These restrictions are necessary to ensure the public’s safety while utilities located within the park’s boundaries are relocated, and to create a staging area to support that work,” CSX said in a statement.

The dog park takes up the northeastern corner of Virginia Avenue Park, which includes a community garden. The garden and the area of the park near 9th Street and Potomac Avenue SE will remain open to the public.

After construction is completed in about 2 1/2 to 3 1/2 years, the dog park will be restored, according to CSX.